On January 6th Florence celebrates the Epiphany with a historical reenactment that was originally started in the XV century by the Congregation of the Star. The reenactment was intended to recall the Magi's journey and visit to newborn Jesus.

Every year, actors waring historical costumes gather in front of Pitti Palace to join a procession that winds through Florence's centre, passing in via Guicciardini, Ponte Vecchio, via Lambertesca, Piazza della Signoria and via dei Calzaiuoli. Once the procession reaches its destination in piazza Duomo, the Magis stop in front of the Nativity and homage Christ.

This is a folkloristic Florentine tradition that dates back to the first Crusade, when European forces laid siege to Jerusalem to claim Palestine for Christianity. Pazzino de' Pazzi, a Florentine nobleman, was the first to climb Jerusalem's walls and was therefore given the gift of three flints from the Church of the Holy Burial. The flints were then brought to Florence and kept in the Church of Santi Apostoli. Ever since, a tradition was started of igniting a holy fire with the three flints on Easter day.

On Easter mornings, an ancient cart loaded with fireworks (which has been used for about 500 years) is pulled by two oxen wearing flower garlands from Porta al Prato to the Duomo, escorted by 150 soldiers and musicians from the Florentine Historical Football.

Once arrived at the Duomo, the cart is connected by a wire to the altar, where the holy fire is burning. A mechanical dove, the 'colombina', is set on fire and flies along the wire to the cart, where it finally ignites the fireworks and starts a pyrotechnical show that lasts for about 20 minutes. 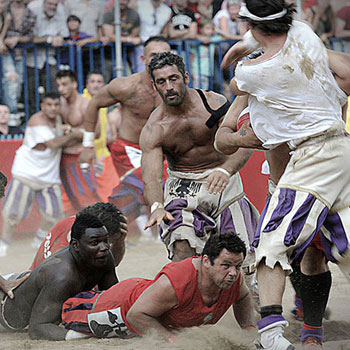 One of Florence's most important and famous events, the Historical Football also dates back to the Middle Ages. Not everybody knows it, but even in the Middle Ages Piazza Santa Croce was used as a 'football field' for sports events. If you pay attention to the walls of the buildings around the square, you can still see the round plates used to draw an imaginary half court line.

Every year, Florence reenacts these ancient events by organising a football tournament. Four teams, each representing one of Florence's boroughs, play in Piazza Santa Croce on 19th, 24th and 28th of June. Such matches are quite far from those we are used to see on TV. Challengers try to grab victory without holding back in order to win the longed for trophy: a fine specimen of Chianina cattle.

Rificolona Feast
Every year, on 7th September, children in Florence pour into the streets holding particular lanterns hung on sticks, which are called 'rificolona'. The event most likely dates back to the XVII century and was born as a celebration of Mary's Nativity.

On such occasion, a great fair was held in the square before the Church of Santissima Annunziata. The night before, farmers moved from the nearby countryside to the city, trying to find a good spot for the next-day fair. On their way, they used to light the road with lanterns hanging from sticks. They then spent the night in the Church, singing hymns to Mary. Today the feast is celebrated all across the city, it has partly lost its religious meaning and is now dedicated to children in general.

The walk on the Duomo's balconies 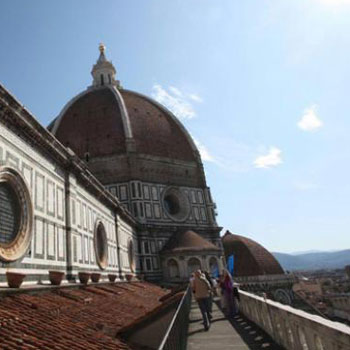 The feast of the Opera di Santa Maria del Fiore – this is in fact the name of the Duomo – was started in 1985 and is celebrated every year on September 8th. The event commemorates the laying of the cathedral's first stone, which supposedly happened on the day of Mary's Nativity.
On this occasion, the Duomo's external balconies are open to the public for free. Florentines and tourists alike are willing to queue just to have this walk at 32 metres above the street level and be able to look at the Cupola from such an unusual angle – and of course at the rest of the city, that stretches out all around.