It is impossible not to be charmed by Florence's ancient beauty. With its historical palaces, its museums and its typical alleys, Florence has to so much to offer in terms of arts and architecture that it is easy to forget about its green spaces. There are in fact wonderful gardens scattered across the Florence. Quiet angles that are as rich in history as the rest of the city, which offer a refreshing relief from the crowded streets. Among the many you could visit, these are the once you really cannot miss. 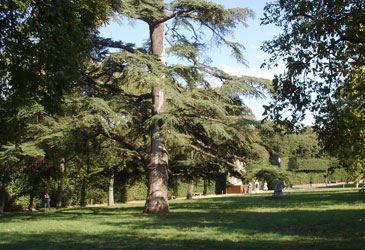 A tour of Florence's gardens must start with the marvellous Boboli gardens. Probably one of the best-appreciated examples of Italian-style gardens of the XVI century, Boboli owns its fame to the Medici family, who stared its construction.

Developed on the side of the hill bearing the same name, Boboli stretches from the back of Pitti Palace to Porta Romana on one side and to Forte Belvedere on the other. Its triangular planimetry was designed by Niccolò Pericoli, an artist who had already realised for the Medici family the gardens of the Castello and Petraia villas.

From Neptune's Basin, the fountain on the rear of Pitti Palace, a central path leads uphill while the many side walks will take you to the park's corners. The architectural plan and the many statues in the park make Boboli a real open-air museum, one that requires constant maintenance. If during your walks you come across a Cultural Heritage Operator at work, stop and have a look at his work.

A complete visit to Boboli take up to three hours.

These are the widest public gardens in Florence and are located on the right bank of the Arno river, just outside the boulevards that mark the city centre's limits. The area that hosts today's park was once bought by Alessandro and Cosimo I dei Medici in 1563. Originally conceived to be an agricultural area, the Cascine were used for hunting and livestock breeding and hosted plantations and rare fruit trees.

When the Lorenas became the ruling family of the Grand Duchy of Tuscany, they decided to transform the Cascine in a public park and commissioned architect Giuseppe Manetti to renovate the area. Manetti started working in 1786 and enriched the park with many architectural elements, including the so-called “Pavoniere” - two great bird cages in form of neoclassical temples, which have today become one of the most picturesque open-air swimming pools in Florence.

Under Napoleon the Cascine were renovated and extended. In the XIX century sports facilities were built, until in 1869 the City of Florence bought the park out. Even today, the Cascine are one of Florentines' preferred spots during the hot season. 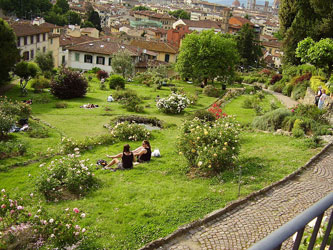 Just below Piazzale Michelangelo, between via delle Rampe and via delle Croci, there is the wonderful Rose Garden. Realised with the sponsorship of the City of Florence, the garden was conceived as an area for rose breeding, hence its name.

The Garden is an exceptional example of the Florentine floricultural tradition and it has a peculiar irrigation system. The water tank is in fact located in the wood behind the Loggia in Piazzale Michelangelo, while water is brought to the garden by a pipe system.
In 1998, the area was enriched by the addition of a Japanese 'Shorai' Garden, donated by the City of Kyoto and by the Zen Kodai-ji temple to the City of Florence. The Rose Garden has also been recently improved by the bronze statues of the Belgian artist Folon.

Although the Rose Garden was built only recently, it nonetheless became one of the most suggestive green spaces in Florence, thanks also to the amazing view of Florence it offers. The best time of the year to visit it is obviously in May, when the roses are blossoming. 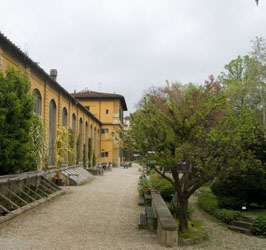 The so-called Semplici Garden – 'semplici' being an ancient word for medical herbs – is in fact Florence's Botanical Garden. Located in the heart of the city, in the proximity of the Church of Santissima Annunziata, the Semplici Garden still preserves its original XVI-century arrangement an hosts plants of every kind, coming from the whole world.

Cardinal Gian Carlo dei Medici used it to host his night parties. In 1753 the Garden became property of the Gergofili Academy and in the XIX century was a common rendezvous place for all citizens.

Nowadays, the Garden is part of the University of Florence and still funcitons as a botanical garden. University researchers and technicians periodically organise mission in Italy and abroad to find new specimens and thus renovate the collection. The Giandino dei Semplici is an important centre for endangered species preservation. 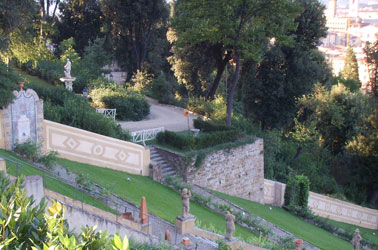 Located on the Boboli hill and delimited by ancient Medieval walls, the garden of Villa Bardini has a centuries-long history and offers a breathtaking view of the whole city.

The Garden's history begins in the XI century, when the Mozzi family had a garden surrounded by walls realised behind the main villa. The garden stretched out on the hill side that today runs from Costa San Giorgio to the Arno's left bank. It was built on a series of terracings, so as to exploit the area for cultivation.

Throughout the centuries the garden was divided into two parts. The Eastern part, more country-like, was owned by the Mozzi family, whereas the Western part was bought by Giovan Francesco Manadori – who commissioned Villa Manadori and the Italian-style gardens. The part that belonged to Manadori was then bought in the XIX century by Luigi Le Blanc, who changed it and made it more similar to a British garden, with a pond, a waterfall and a fountain linked together by a underground channel.

In 1913, the whole area was bought out by antique dealer Stefano Bardini. Bardini renovated the green areas and improved the part that belonged to the Mozzi family, which had by then fell in disuse. The Garden was forgotten and neglected after Bardini's death, until it finally undergone a serious renovation process and opened to the public in 2005.

Today the Bardini Garden hosts an important exhibition centre for modern art, a café and a restaurant.